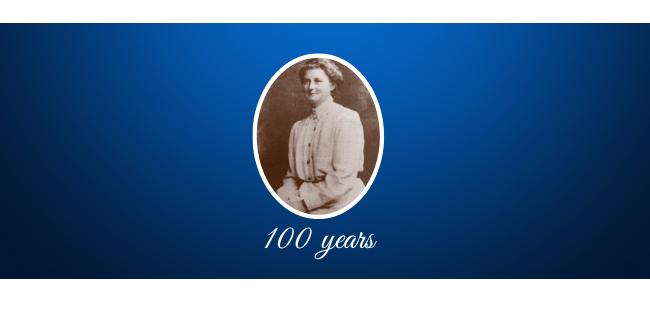 Aleen Isabel Cust MRCVS was born at Cordangan Manor, County Tipperary. Following a private education, and against her family’s wishes, in 1896 she decided to pursue a career as a veterinarian. She spent a year studying for her entry qualifications before being welcomed into William William’s New Veterinary College in Edinburgh. Aleen was an outstanding student and was gold medal winner in her first year.

In 1897, she was due to sit the first of her professional examinations, but her application was refused by the RCVS on Counsel’s advice that the college had no power to admit women. She challenged the College in an Edinburgh Court but Scottish Courts had no jurisdiction over a London corporate body. So, she went on to complete her course in 1900 but was not allowed to call herself a veterinary surgeon.

Despite this, Professor Williams recommended her for a post as an assistant to William Byrne MRCVS in a practice in Roscommon, Ireland. The arrival of Miss Cust “caused consternation and scandalised the priesthood but her competence and poise won her respect” (Hall, S., 2004).

In 1910, Byrne died and Cust took over his practice, making her visits riding an Arab stallion side-saddle or driving one of her several horses in a gig.

The role of women aiding the war effort was rewarded by the passing of the Sex Disqualification (Removal) Act of 1919. This legal change meant that the RCVS could no longer refuse Cust membership. On 20 December 1922, Aleen Cust was admitted MRCVS, twenty-two years after completing the veterinary course in Edinburgh.

Formed by a small group of veterinary surgeons, the Aleen Cust Memorial Society are planning a two-day conference on 11 and 12 August 2022. To find out more about Aleen and the conference to commemorate her, visit: www.fullhouseevents.ie/aleen-cust-centenary-conference